ASP.NET interview questions: - What is the difference between “Web farms” and “Web garden”?

“Web farms” are used to have some redundancy to minimize failures and to meet heavy load demands.

It consists of two or more web server of the same configuration and they stream the same kind of contents. When any request comes there is switching / routing logic, which decides which web server from the farm, handles the request. For instance, we have two servers “Server1” and “Server2” which have the same configuration and content. Therefore, there is a special switch, which stands in between these two servers and the users and routes the request accordingly. 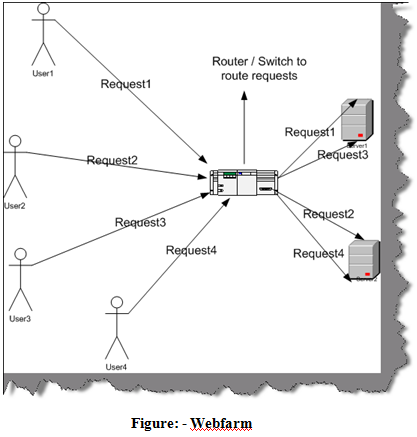 Above figure explains in detail how web farm work. You can see there is a router in between which takes a request and sees which one of the server is least loaded and forwards the request to that server. Therefore, for request1 it route is server1, for request2 it routes server2, for request3 it routes to server3 and final request4 is routed to server4. So you can see because we have web farm at place server1 and server2 are loaded with two request each rather than one server loading to full. One more advantage of using this kind of architecture is if one of the servers goes down we can still run with the other server thus having 24x7 uptime.

The routing logic can be a number of different options:-

Before we try to understand what a web garden is let’s try to understand how IIS handles processes. All requests to IIS are routed to “aspnet_wp.exe” for IIS 5.0 and “w3wp.exe” for IIS 6.0. In normal case i.e. with out web garden, we have one worker process instance (“aspnet_wp.exe” / “w3wp.exe”) across all requests. This one instance of worker process uses the CPU processor as directed by the operating system. 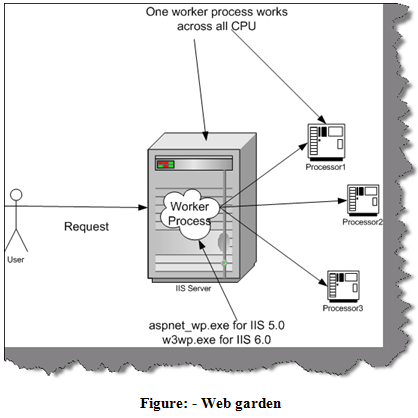 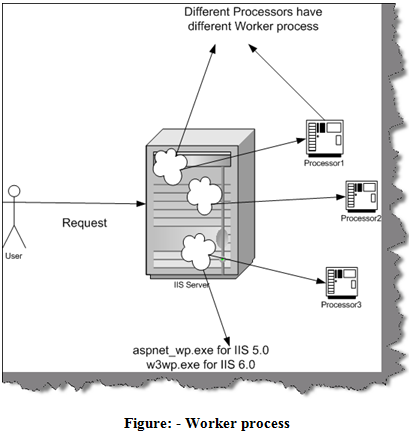 In short, we can define a model in which multiple processes run on multiple CPUs in a single server machine are termed as Web garden.