What is the difference between “Web farmsWeb g” and “arden”?

“Web farms” are used to have some redundancy to minimize failures and to meet heavy load demands.

It consists of two or more web server of the same configuration and they stream the same kind of contents. When any request comes there is switching / routing logic, which decides which web server from the farm, handles the request. For instance, we have two servers “Server1” and “Server2” which have the same configuration and content. Therefore, there is a special switch, which stands in between these two servers and the users and routes the request accordingly. 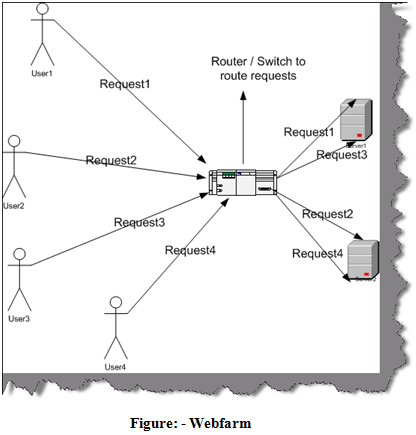 Above figure explains in detail how web farm work. You can see there is a router in between which takes a request and sees which one of the server is least loaded and forwards the request to that server. Therefore, for request1 it route is server1, for request2 it routes server2, for request3 it routes to server3 and final request4 is routed to server4. So you can see because we have web farm at place server1 and server2 are loaded with two request each rather than one server loading to full. One more advantage of using this kind of architecture is if one of the servers goes down we can still run with the other server thus having 24x7 uptime.

The routing logic can be a number of different options: -

Before we try to understand what a web garden is let’s try to understand how IIS handles processes. All requests to IIS are routed to “aspnet_wp.exe” for IIS 5.0 and “w3wp.exe” for IIS 6.0. In normal case i.e. without web garden, we have one worker process instance (“aspnet_wp.exe” / “w3wp.exe”) across all requests. This one instance of worker process uses the CPU processor as directed by the operating system. 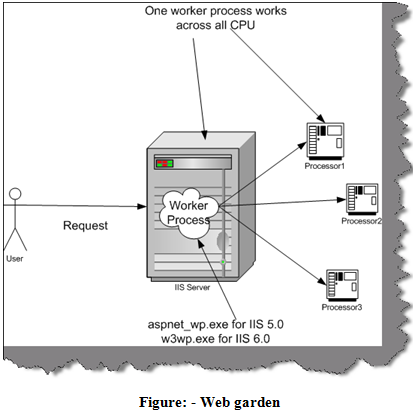 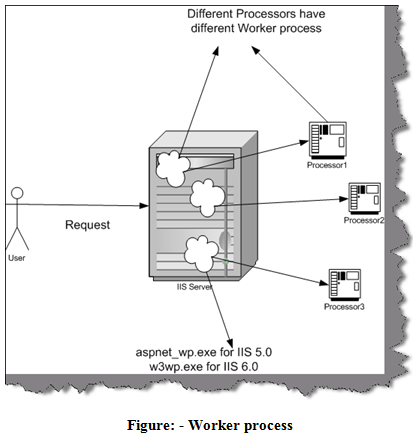 In short, we can define a model in which multiple processes run on multiple CPUs in a single server machine are termed as Web garden.

How do we configure “Web Garden”?

“Web garden” can be configured by using process model settings in “machine.config” or “Web.config” file. The configuration section is named

Do not preface the number with zerox because the result of the calculation is a decimal number. The following example demonstrates the process Model element that is configured to enable only the first two processors of a four-processor computer.

Save the Web.config file. The ASP.NET application automatically restarts and uses only the specified processors.

If you want to learn or want more on ASP.NET learning then follow site www.questpond.com

When it comes to .NET error and exception handling this is one of the favorite .NET interview question. Below is the simplest one line answer for the above question.

To understand the above one liner answer you can watch this .NET interview question video which explains throw vs throw ex in C#.

Below are the broader steps to enable a SQL Cache Dependency: -

-ed :- command-line switch
-E: - Use trusted connection
-S: - Specify server name it other than the current computer you are working on
-d: - Database Name

So now, let us try to understand what happens in the database because of “aspnet_regsql.exe”. After we execute the “aspnet_regsql -ed -E -d Northwind” command you will see one new table and four new stored procedures created.

Essentially, when a change takes place, a record is written in this table. The SQL Server polling queries this table for changes. 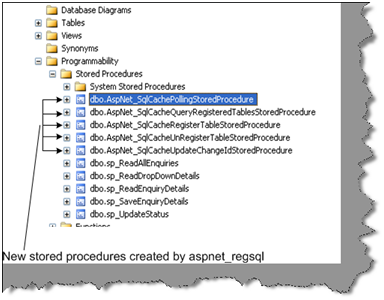 Just to make brief run of what the stored procedures do.

“AspNet_SqlCacheRegisterTableStoredProcedure” :- This stored procedure sets a table to support notifications. This process works by adding a notification trigger to the table, which will fire when any row is inserted, deleted, or updated.

“AspNet_SqlCacheUnRegisterTableStoredProcedure”:- This stored procedure takes a registered table and removes the notification trigger so that notifications won't be generated.

“AspNet_SqlCacheUpdateChangeIdStoredProcedure”:- The notification trigger calls this stored procedure to update the AspNet_SqlCacheTablesForChangeNotification table, thereby indicating that the table has changed.

AspNet_SqlCacheQueryRegisteredTablesStoredProcedure:- This extracts just the table names from the AspNet_SqlCacheTablesForChangeNotification table. It is used to get a quick look at all the registered tables.

AspNet_SqlCachePollingStoredProcedure:- This will get the list of changes from the AspNet_SqlCacheTablesForChangeNotification table,It is used to perform polling.

Once the necessary stored procedure and tables are created then we have to notify saying which table needs to be enabled for notifications.

That can be achieved by two ways:-

Registering tables for notification internally creates triggerfor the tables. For instance, for a “products” table the following trigger is created. So any modifications done to the “Products” table will update the “AspNet_SqlCacheNotification’ table.

“AspNet_SqlCacheTablesForChangeNotification” contains a single record for every table you're monitoring. When you make a change in the table (such as inserting, deleting or updating a record), the change Id column is incremented by 1.ASP.NET queries this table repeatedly  keeps track of the most recent changed values for every table. When this value changes in a subsequent read, ASP.NET knows that the table has changed.

Now that all our database side is configured in order to get the SQL Cache working in the ASP.NET side we need to do some configuration in the web.config file.

We need to set two attributes in the “web.config” file:-

Below is the snapshot of the web.config file. 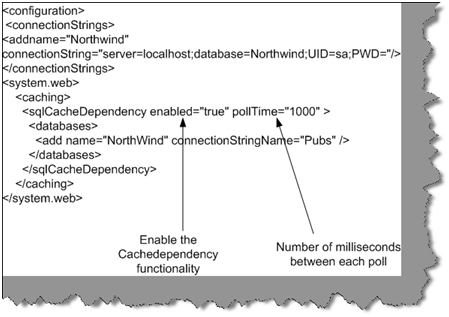 Finally use the Cache dependency object in your ASP.NET code

Now comes the final step to use our cache dependency with programmatic data caching, a data source control, and output caching.

To perform the same trick with output caching, you simply need to set the SqlDependency property with the database dependency name and the table name, separated by a colon:

The same technique works with the SqlDataSource and ObjectDataSource controls:

Note:- ObjectDataSource doesn't support built in caching for Custom types such as the one in our example. It only supports this feature for DataSets and DataTables.

Just to make a sample check run the SQL Server profiler and see that does the SQL actually hit the database after the first run.

A big thanks to out sponsor’s  www.questpond.com to provide this ASP.NET CSS  interview question.
CSS column layout helps you to divide your text in to columns. For example consider the below magazine news which is one big text but we need to divide the same in to 3 columns with a border in between. That’s where HTML 5 column layout comes to help.

To implement column layout we need to specify the following:-

To specify column-count we need to use the below code. “webkit” and “moz-column” are needed for chrome and firefox respectively.

Below is the complete code for the same. 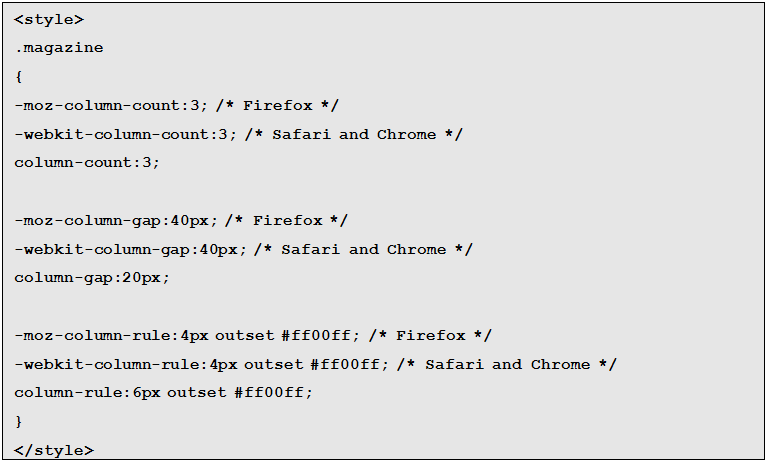 You can then apply the style to the text by using the class attribute.

Below is a nice interview question video for quick revision.

Following are tips which will increase your SQL performance: -

Below are some scenarios where serialization is needed: -

Can we see a simple example of SVG using HTML 5?

Let’s say we want to display the below simple line using HTML 5 SVG.

Below is how the code of HTML 5. You can see the SVG tag which encloses the polygon tag for displaying the star image.

What is canvas in HTML 5?

Canvas is an HTML area on which you can draw graphics.

So how can we draw a simple line on Canvas?

So to define canvas area you need to use the below HTML code. This defines the area on which you can draw.

To draw on the canvas area we need to first get reference of the context section. Below is the code for canvas section.

Now once you have access to the context object we can start drawing on the context. So first call the “move” method and start from a point , use line method and draw the line and then apply stroke over it.

Below is the complete code.

You should get the below output.

Output element is needed when you need calculation from two inputs to be summarized in to a label. For instance you have two textboxes( see the below figure) and you want to add numbers from these textboxes and send them to a label.

Below goes the code of how to use output element with HTML 5.

You can also replace “parseInt” with “valueAsNumber”.

We are thankful to questpond.com to provide this HTML 5 interview question with answer.

A typical web page has headers, footers, navigation, central area and side bars. Now if we want to represent the same in HTML 4 with proper names to the HTML section we would probably use a DIV tag.
But in HTML 5 they have made it more clear by creating element names for those sections which makes your HTML more readable.

Below are more details of the HTML 5 elements which form the page structure.

XAML is a XML file which represents your WPF UI. The whole point of creating the UI representation in XML was write once and run it anywhere. So the same XAML UI can be rendered as windows application with WPF and the same UI can be displayed on the browser using WPF browser or Silverlight application. 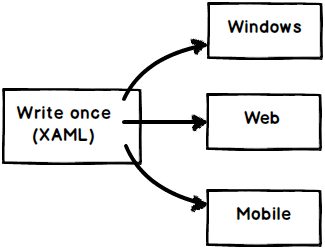